A man shot his neighbor with an air rifle in front of his baby girl, then brandished a crossbow during an argument over the noise of gardening at the start of the lockdown, a court said.

Graham Barker, 55, was jailed for three and a half years last week at Hove Crown Court for the attack on his neighbor Mark Smith shortly before 7 p.m. on April 15 last year.

The row began after Mr Smith and his fiancee Kirsty Duparc used an electric sprinkler system on the balcony of their apartment in Ingram Crescent West, Hove.

Barker objected, so the couple switched to a conventional watering can – but Miss Duparc yelled at them to stop being a bully.

Barker then returned to his apartment and climbed onto his balcony with an air rifle, which he used to shoot Mr Smith in the shoulder – in front of his two-year-old daughter Alia.

Continuing, Jennifer Gray said: “It caused injuries to Mr. Smith and, unsurprisingly, fear to the whole family, including his crying baby girl.

“The accused then returned to his apartment and came out with a crossbow which he then pointed at Mr. Smith, at which point Miss Duparc was yelling at Mr. Smith and his daughter to come inside the apartment.

“Armed police officers were called and when they arrested this accused they said he smelled strongly of alcohol and was hesitant on his feet. “

Officers seized the .22 caliber air rifle, which was still loaded with pellets, a large crossbow, two small crossbows and a plethora of arrows. 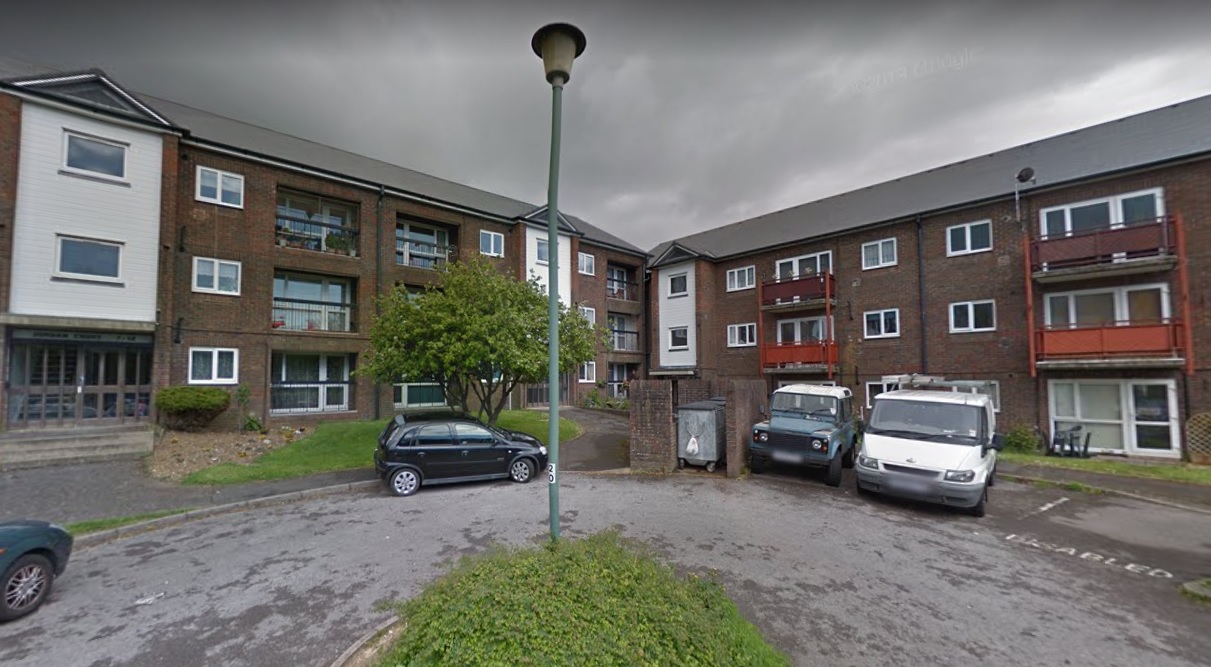 The apartments of Ingram Crescent where the shooting took place

Neither Mr Smith nor Miss Duparc made a statement on the victim’s impact prior to sentencing as they said they were afraid of Barker’s reaction.

However, Mr Smith gave a statement to police shortly after the attack, which was read out in court.

He said: “This is a place we have made our home and I should feel safe. However, my fiancee was extremely upset and now fears for our safety.

“I’m afraid we will see this man again in the future because he lives across from our apartment. Kirsty says she doesn’t feel safe.

“He is unstable, unpredictable and violent.

“My endangered family is my worst nightmare. We need to feel safe in our own home. However, at the moment, we are not doing this.

In defense, Sarah Thorne said Barker had changed her life after a long period of homelessness on the streets and had been a model citizen for the past 15 years, mentoring a junior colleague and helping elderly neighbors with their purchases during locking.

She said he was hit hard by the first lockdown and was particularly frustrated seeing people coming and going from the building and breaking the rules.

She begged the judge not to jail Barker, saying he would get out of jail on the streets and come back to square one.

She said: “The net result would be to make this man more dangerous than before, to effectively destroy everything he has put in place in the last 15 to 16 years.

“This is a decisive situation for this man today and it seems to me that you could discharge your public duty by taking a risk.

“I understand it’s a risk, but he would be closely watched by probation, he has his friends and he wants to be away from these apartments very soon.”

“If there is any suggestion that he is approaching these people or if there is anti-social behavior related to alcohol, he will be in violation and he will be taken to court and his feet will not touch the ground. “

However, during sentencing, Judge David Rennie said that while Ms Thorne’s arguments were “convincing and convincing,” the offense was too serious for anything other than an immediate jail sentence.

He said: “Neighbors can annoy each other at times, especially with the extra locking pressures. This experience is nothing unusual. It’s usual.

“What is far from common is your extreme and dangerous reaction to the situation you thought you were facing that day.

“You then went for a crossbow, a weapon that most people would realize has the potential to be lethal.”

Barker, who pleaded guilty on June 17, was sentenced to three and a half years for possession of the air rifle and 12 months running concurrently for assaulting Mr Smith.

An injunction preventing him from contacting Mr. Smith and Miss Duparc for seven years was also imposed.